Production on the first season of Young Justice has officially ended as of November 21, 2011, 14:38 PDT. We screened and locked our season one finale and sent it on its way to Cartoon Network. It felt kinda weird. Ending a season seems like a landmark to stop and appreciate- maybe eat some cake or something. But season two production is moving so fast that we blazed right through our finale screening only to hurry off to a season two production meeting.

Anyway, the finale turned out pretty awesome! It's JAM PACKED! If you blink, you'll miss something. So I'm telling you now, don't blink when you watch the finale because we definitely wrap up all our season one story lines and answer all of your burning questions. Or do we? Either way, I think you're going to love how we close out the season.

Hey, you wanna see our first season story wall? Here it is (censored to hide the plot lines of unaired episodes, of course). 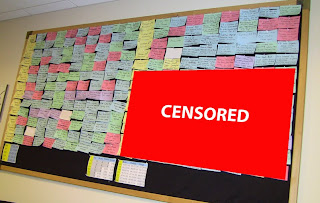 This wall of cards is how we plan and track the season story arcs. I imagine this practice isn't all that different from other productions. I mean, I don't know how else you would keep track of so many multilayered plots and subplots that are further complicated by secrets and lies. Greg has gone the extra step of color coding the cards to make tracking certain elements a little easier for us. Yellow cards track the titles and timeline. Blue cards track the stories of our teens as superheroes. Purple cards track the stories of our teens outside of their hero lives. Red cards track Justice League stories. Green cards track bad guy stories. White cards... don't ask me about the white cards. I can't tell you what those are for.

I've been trying to answer some of your questions in the comments section but I figured I might as well post the answers here as well. Thanks for your questions. I'll try to continue to answer more of them and post more behind the scenes stuff as my schedule allows.

Q: When you build a character, are you trying to make them feel as real as possible? Or do you also keep in mind their symbolic role in a fictional work?

A: The goal for every character in the show is to introduce them in the most realistic way possible while keeping in mind their symbolic role in the DCU. A great example of this can be seen in the costume design sensibility for our heroes. The Justice League represents the classic American superhero so I wanted their costumes to be pretty close to their original designs established in decades of comics. But our young heroes are of a new generation and I wanted that reflected in the tailoring of their clothes which is why their designs are a little more modernized from what fans are familiar with. So that's just one example. As form follows function, design and writing follows character which includes any symbolic role any given character may hold.


Q: The animation on Young Justice is phenomenal. It seems that the two studios MOI and Lotto essentially alternate. Would it ever make sense to have 6 or 7 animation studios to speed up production or is that not how it works? Is there a "sweet spot" for the ideal amount of overseas partners to work with on a project?

A: The more studios involved in a production the more you run the risk of inconsistent animation. First of all, as with any artist, it takes time to learn and master a new design style. Each animation studio takes about 3 episodes (give or take) to really master a new show's design style. So if you give 6 studios about 3 episodes to master a show style then you're possibly going to be looking at up to 18 episodes of wildly fluctuating quality and consistency. And even after each studio masters a new style you'll still be able to spot differences in style between studios. As with individual artists, each studio tends to have their own slight variation on any given style. I'm not sure that every viewer can see it but I can easily tell the difference (it's a subtle difference) between Lotto and MOI episodes. So for the sake of consistency and getting a series on model as quickly as possible I prefer to work with as few studios as possible. Right now I'm very happy with how well Lotto and MOI are synchronized with their interpretation of our designs so 2 studios is working out well for our series.


Q: Any plans to write an issue or so of the Young Justice tie-in comic?

A: Nope! That project is all Greg Weisman and Kevin Hopps now. I kicked in some ideas for stories at the beginning of the comic project like explaining character origins and the history of Mount Justice- stuff like that. That was back when Mike Baltazar and Franco Aurliani were writing the early issues and we were offering them some advice to help tie the comic in with the show. But otherwise the comic stories are out of my hands.


Q: Was the headquarters for the Injustice League a homage to the Hall of Doom?


Q: I read on askgreg (also noticed it too when watching) that you intentionally made some character design changes like adding the armour/padding to kid flash etc. What was ur thinking behind this?

A: In our series, Kid Flash uses his speed powers to become a human cannonball. He's not invulnerable so he needs the armor and padding to protect himself while hurling himself into bad guys or even sliding to a stop (because our Kid Flash can NOT stop on a dime like some other speedsters can). Please see my earlier posting for more about this.
Posted by Brandon Vietti at 11:08 PM