Hey, folks. Been awhile. Been busy makin' a show. But things are winding down now. Greg and I are reviewing the last storyboards and designs for the last episode of Season 2 right now. Once that's complete my work load will be considerably lighter which means I might actually get to post on this blog a little more. We'll see.

Young Justice Season 2 begins airing tomorrow morning! We are very excited to share with you what we've been cooking up. We hope you'll be pleasantly surprised- unless you've been poking around the internet, discovering leaks and spoiling the surprises for yourself. Spoiled or not, I hope you enjoy watching the official premiere of Young Justice Invasion as much as we enjoyed making it. 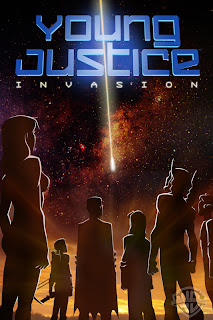 The above image that many of you have already seen around online was the first pitch art I created back when Greg and I were pitching our Season 2 ideas to our bosses. It was really only meant to be rough pitch art but everybody seemed to like it so I polished it up a bit with the help of Peter Girardi and the next thing I know I'm seeing the image in packs of playing cards at San Diego Comic Con. At the time I drew this our cast had not been finalized and, of course, character designs were far from final.  I'm sure many of you guessed Robin and Blue Beetle from their distinctive silhouettes. That's Wonder Girl in the foreground. The rest I will leave to your imagination. Maybe at the end of the second season I'll fill you in on who they're supposed to be and why we did or didn't include them in the show.

Greg and I chatted about Season 2 with some really cool websites that have been kind enough to post about Young Justice. If you'd like to read about our thoughts on Season 2 then check out the links below. Some of our quote credits got reversed in a couple of the articles (a common occurrence in phone interviews) but you'll get some juicy behind the scenes info from us none the less.