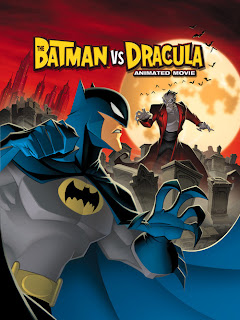 If you're looking for a fun Halloween themed movie to watch this Halloween night then you should check out The Batman Vs. Dracula. I directed the first third of the movie, Seung Eun Kim (The Boondocks) directed the middle third, and Sam Liu (Batman: Year One, Green Lantern: The Animated Series) directed the last third.

The Batman series ran for five successful seasons and I was a director on the first four of those seasons. It was difficult work to be the new Batman series following Bruce Timm's run with the character- big shoes to fill! But I was proud of the work our crew did in creating a new and unique take on the Batman universe that stands very well on it's own. We introduced Batman to a new generation of kids and reimagined his Rogues Gallery of villains in a really interesting new way. And we won an Emmy! That was cool!

The Batman crew has, of course, moved on to other cool projects in the animation world. The Batman Producer and Story Editor Duane Capizzi is now producing the Transformers: Prime series. Story Editor Michael Jelenic went on to produce Batman: The Brave and the Bold and is now producing the new Thundercats series. Producer Michael Goguen produced the Superman/Batman: Public Enemies movie and is now directing for Batman: The Brave and the Bold. Producer and Art Director Jeff Matsuda jumped over to Marvel to design the Hulk Vs. Wolverine movie and Character Designer Jose Lopez is now the lead designer for Transformers: Prime. Character Designer Jon Suzuki went on to work with me on Batman: Under The Red Hood as lead character designer and continues to crank out awesome designs for all the other DCU animated movies. And Character Designer Thomas Perkins has too many cool post-Batman credits to list so you should just check out his blog that I linked to his name to learn more about him.

You can watch The Batman Vs. Dracula on Netflix, download it from iTunes, or buy it from Amazon.
Posted by Brandon Vietti at 2:34 PM