I thought I'd post a little behind-the-scenes material from Young Justice. If I have the time, I will try to update this blog with more entries like this with some regularity in the coming weeks.

When Greg Weisman and I started developing Young Justice we had a lot of discussions about how we could make another DC superhero show in a way that feels new. In both art direction and story a lot of ground has already been thoroughly explored in shows like Justice League, The Brave and the Bold, Teen Titans, Legion of Superheroes, The Batman, and Batman: The Animated Series. We had no desire to disrespect any of those great shows by trying to copy or emulate them. So it was important to us to create something new to establish a unique identity for our series, present familiar material in a new light for our audience, and also to challenge ourselves artistically.

I think one of the most defining characteristics of our series is realism. Once Greg and I established a realistic tone for the series it was clear that the art style of the show would have to match that tone. I do the majority of the art directing as part of my duties producing the show so the first rule I established during character design development was that it should never appear that any of our heroes shop at the same store for their clothes. Each costume should not only reflect the wearer's personality, physical needs, and traditional DCU look but also have unique tailoring. Conveying a sense of texture/tailoring variation between costumes would be the mark of realism needed to match the tone of the stories Greg and I want to tell. Hopefully it would also help to visually set our series apart from the other animated DCU TV shows that came before us. 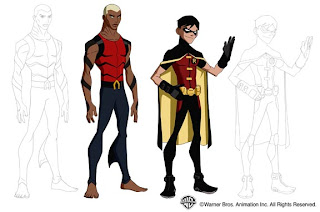 The two characters that best illustrate a difference in tailoring are Aqualad and Robin . Aqualad's outfit is nearly seamless and shiny to convey a slick and textureless material designed to cut through water fast. Robin, on the other hand, has a costume that's all about seams and padding. When fighting crime on the streets of Gotham it just makes sense to wear protection. Robin's costume seams imply reinforced stitching and sewn in materials designed to protect the body during street fights or even stop a bullet. Unlike other versions of Batman in the animated DCU, our Batman will have the same extra stitching lines on his outfit for all the same reasons that Robin does. The subtle difference between them is that Batman's costume may have the feel of next gen. military gear where as I wanted Robin's outfit to be a little more sport inspired to match his youthful energy. Kid Flash not only runs fast but also uses his momentum to become a human cannonball. His costume needs to be protective against skidding and impacts so I wanted him to have lots of pads and a leathery texture which is indicated by thick folds seen on his outfit.

I could ramble on about the theories behind the other costumes in the show but I think you get my point. There's a lot of thought behind these designs and our choices are all designed to visually ground the show in reality. But all these choices and theories are pretty useless if you don't have a designer who can make them a reality which is why I was extremely lucky to get my friend Phil Bourassa to be the lead designer on Young Justice. Phil has an innate sense of how to make all of these theories about realism work to enhance a character's personality and look good on screen. He lives and breathes this sensibility.

Our design process begins with a talk about each character and maybe a look through some photo reference I gather together before he sets to work. More often than not he just comes up with concepts on his own. Either way, Phil nails it whenever he brings a new design to the table. He's a sharpshooter. He only seems to need one or two passes on a character before he finds the final design which always exceeds expectations. He's that good! And if you compare his current designs with his previous work on Crisis On Two Earths and Planet Hulk I think you'll find that he's doing his best work now for Young Justice. Lucky us! Check out more of Phil's work on Deviant Art. http://phillybee.deviantart.com/
Posted by Brandon Vietti at 12:05 AM