Would you like to know a little more about the Young Justice Watchtower and Hall of Justice? Well, here's a little info about the thought that went into their designs. 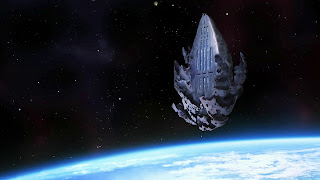 On Earth 16 the Watchtower is a secret place so I couldn't design it in a way that might imply the Justice League hauled up loads and loads of building materials from the planet and put the thing together. There are too many eyes on the League. They're famous. There's no way they could build a space station without someone finding out about it.

In order to acquire some orbital real estate that met some very specific requirements I figured the League would have to turn to their most trusted outer space connections, the Green Lanterns. This led to the idea of the Earth 16 Watchtower being a decommissioned Green Lantern base station. It was towed to Earth by Hal Jordan and John Stewart.

One clue to the Green Lantern origins of the Watchtower are the designs cut into the rising elements of the Mission Room floor. Those designs are basically Green Lantern symbols. Also, the entire station is built for beings capable of flight. We tried to reflect this by designing a lot of vertical spaces with stacked ledges that don't appear to be easy to get to for pedestrians. There are elevators for pedestrian visitors but they're not highly visible. 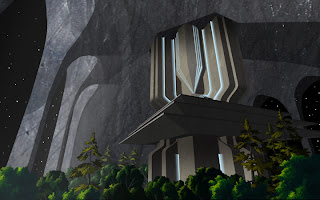 The Watchtower's structure was carved into the body of an asteroid. Through the sophistication of the carving, the design aesthetic, and the implied technology throughout I hoped to communicate at a glance that the structure had not been constructed by human hands. I say "implied technology" because clearly the Watchtower has gravity, atmosphere, and cloaking capabilities that hide it from ground based telescopes and radar but no technology is seen performing these functions. Humans obviously have no such technology so advanced alien technology is implied here. The only exceptions to the alien tech are the few pieces of Earth tech (Zeta Tubes, etc.) that the League added to suit their needs. I had hoped to find a place in the series to explain all of this but we had so many other story elements to manage in each episode that the Watchtower back story fell to greater needs. We did manage to mention that the Watchtower has no weapons in the 20th episode of season one (Coldhearted). 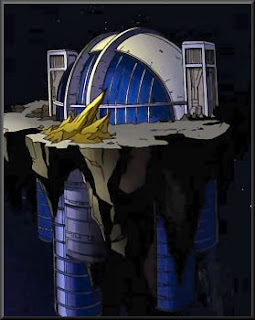 The Young Justice Watchtower wasn't my first Watchtower design. Back when I was directing on The Batman I introduced the Watchtower in the final episode of Season 4. I sketched out a domed version of the Super Friends Hall of Justice that was built onto an asteroid with some extra structures beneath it. I pitched the idea, everyone seemed to like it, it went through the design department and ended up in the show. 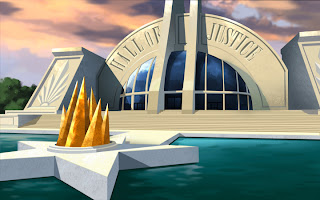 I always liked the domed Hall of Justice look from The Batman's Watchtower so it became a starting point when I began working out ideas for the actual Hall of Justice in the Young Justice series. I think everyone knows that the Hall of Justice from the Super Friends was inspired by the Cincinnati Union Terminal, a beautiful Art Deco structure. I wanted to capture the spirit of that classic Super Friends Hall but because the Young Justice Hall is a modern building it made no sense to use the original Art Deco design. I sat down with Dan Norton (art director for Thundercats) and explained my design ideas to him. He whipped up an amazing assortment of designs for the Hall and we quickly finalized the version you now see in the show.
Posted by Brandon Vietti at 2:05 PM